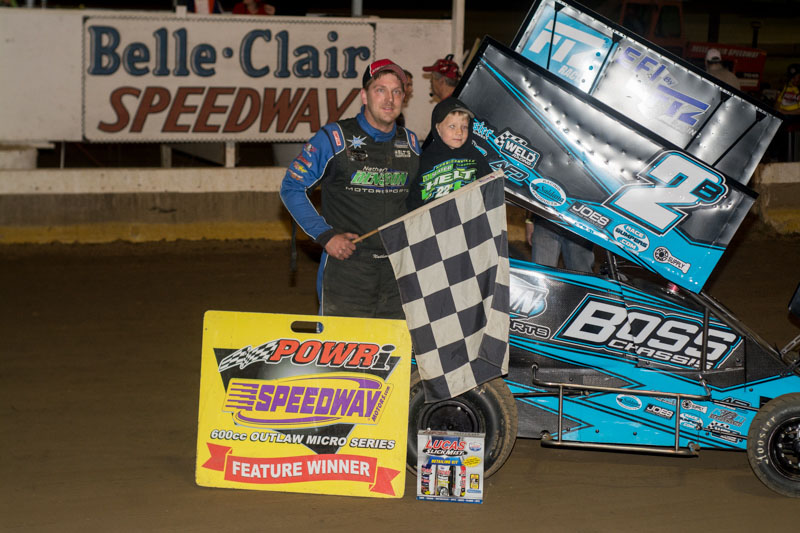 April 15th, 2016 – Belleville, IL – Nathan Benson of Concordia, Missouri conquered the Speedway Motors POWRi 600cc Outlaw Micro Series feature at Belle-Clair Speedway after a hard fought battle with Jeremy Camp, and holding off a hard charging Joe B. Miller to snag the season opener victory. Benson started on the front row outside of Lucas Pejakovich for the start of the 20 lap main event. At the drop of the green, Pejakovich looked to have the advantage over Benson and Jeremy Camp until Pejakovich clipped the infield tire exiting turn four. However, Pejakovich would save it, ultimately losing spots, but the caution would fly for Tyler Robbins in the middle of turns three and four.

Returning to green flag racing, Jeremy Camp would follow Benson into turn one, diving to the bottom of the high-banked 1/5th mile as Benson screamed around the high side. With Benson working the tall Belle-Clair Speedway cushion, Camp craftily worked the low side, closing in as the laps counted off. On lap five, Camp would officially take the lead off turn two as the Chad Bartosik Motorsports OSR/Suzuki-powered Sawyer Chassis stayed glued to the bottom. As both drivers continued to work their preferred lines, Joe B. Miller would be on the move from the tenth starting position, up to fourth by the time the yellow flew for Frank Flud’s disabled machine on the front stretch.

With 11 laps in the books, Camp would take back off to the bottom as Benson ripped the curb while Miller dispatched of Matt Howard for third. On lap 15 Benson would regain the lead as Camp’s machine appeared to lose ground from the beginning of the restart to Benson’s FTZ/Suzuki-powered BOSS Chassis, setting up a duel between Camp and Miller as Benson pulled away. With laps winding down, Miller completed the pass on lap 18 for second, but was unable to reel in Benson enough to challenge for the lead. Matt Howard would bring home fourth with Slater Helt rounding out the top five.

“This is one of my favorite tracks, but we haven’t won a lot here,” said a victorious Nathan Benson. “This is, I think, only the third or fourth time we’ve won here. I about gave it away. I saw Jeremy on the bottom, which I knew he was, and I tried to take his line and see if I could make the bottom work, but I hit that hole and about knocked the wind out of me and the car came three feet off the ground. I can’t say enough about this car, our supporters and my family.”

“I thought we could double-down there, but the car was a little off,” explained second place finisher Joe B. Miller. “After that caution, I got a little tight and was missing my marks. But, it was a good night; a lot better than where we have been the last two weeks. Once again, I’ve got to thank everyone that helps us.”
“It’s not too bad. It just sucks leading half the race there and losing it at the end,” stated third place finisher Jeremy Camp. “We just got a little loose, but that’s the way it goes. We’ll come back next time. Hope to get a victory then.”